I’m beginning to panic a little bit about all the ‘stuff’ I need to get done before we go on holiday for a few weeks (South of France, staying in a lovely little cottage near Nimes, can’t wait!). So I’ve done a bit of gardening in the rain tonight – we did actually have a little bit of sunshine earlier but it soon clouded over.

Before I did anything else, I ‘harvested’ some lettuce, mixed leaves and rocket – all of which has suddenly grown and seem to be taking over the cold frame.

Then some potting on – little and large here were sown on the same day but one courgette plant seems to have done a lot better than the other. 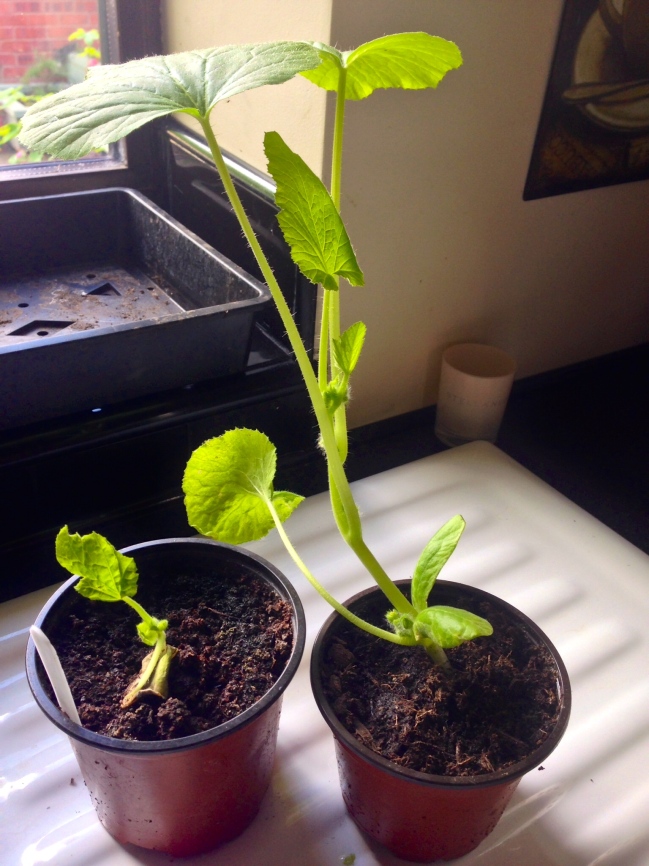 I popped the larger one in a pot, putting in a cane to help support it before placing the plant in the pot – I’ve managed to skewer the roots of a plant in the past so I’m trying to be a bit more careful now…

Some of the tomatoes needed tying up and a couple needed a better cane support so I got those jobs done before making up a couple of hanging baskets which are going to go out at the weekend.  By that time it was raining quite heavily so I put everything back in the greenhouse, watered all the tomatoes, cucumbers, peppers and flowers and made a dash back to the house. Not before taking a couple of photos of the packed greenhouse, a sight that makes me very happy 🙂

13 thoughts on “News from the Potting Shed”

A Tiny Farm In A Big Garden